Status
Not open for further replies.

Administrator
Okay we have gotten through most of preseason, and time is coming for trimming of rosters and quick moves to fix holes. Lets see what news is up...

CAR - Cam Newton is officially out of his boot, and may see practice time this week
IND - in case you thought it was a hoax, Indy has put Andrew Luck on retired list
TEN - Early QB pull in Tenn. game was due to HC frustrated the O-line was not protecting Mariota at all not due to his performance. Sure...
LAR - Lb Josh Carraway has tore his achilles and is out rest of season, OL Aaron Neary fractured his ankle and will also miss this year
MIA - making moves to drop their age and cost - cut T. J. McDonald S over the weekend
NE - making roster moves... - released DL Keionta Davis and Wr Maurice Harris with injury designations. They placed Lb Brandon King on IR, and signing Rb Robert Martin and Lb Scooby Wright ruh roh folks...
ARI - have placed rookie Wr Hakeem Butler on IR and also S Josh Shaw on IR as well
NE - Josh Gordon was in full pads and practicing Sunday
CIN - new HC has named UDFA Rookie Wr Damion Willis as starter opposite Tyler Boyd til A.J. Green gets back
MIA - rumors was he will be traded now team has given him assurances he is staying Reshad Jones S must be a bit dizzy
ARI - is cutting Lb Andre Branch
NYG - keeps saying Eli is the starter, so he won't play at all this week, and Daniel Jones will start
HOU - per some reports Lamar Miller has a torn ACL and MCL ligament in his knee - not good for a guy with that much mileage on him
OAK - made some roster moves - signing DL Corey Liuget and placing Rb Doug Martin on IR
WAS - has named Case Keenum as starter for week 1 - big surprise here... Colt still having issues and Rookie needs more time to get ready
OAK - So Antonio Brown issue should be over, he lost his second appeal, but he has a huge $$$ offer from helmet companies to wear theirs, so he is all good now....
ATL - First round pick OT Kaleb McGary has been cleared to resume practice - had a heart procedure done

Administrator
More news:
KC - sign FA Qb Matt Moore to be back up Qb, as they lost Chad Henne this weekend to a broken ankle 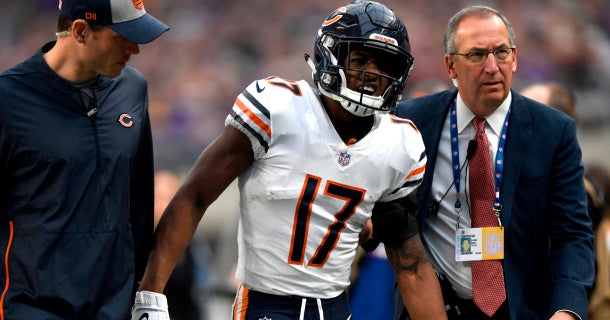 Wide receiver Anthony Miller returned to practice on Monday at Halas Hall and expects to be ready for Week 1.

Miller was injured but looks to be good to go

Administrator
More news:
CAR - is nervous about K Graham Gano and his balky knee, they picked up Frye the K CHI released and he is 6 for 6 so far
NE - C David Anderson was released from a hospital after getting treatment for blood clots in his lungs - will be out quite a while, and this really hurts the O-line for NE
NE - S Patrick Chung pleaded not guilty to his issues, and NFL won't really do much until legal proceedings have been completed
HOU - Rb Lamar Miller has been placed on IR - Duke Johnson and company will not vie for lead back role
DAL - Cb Byron Jones was activated off of PUP list
ATL - plan to finish deal with Julio Jones prior to start of season
SF - has activated starting C Weston Richburg off of PUP list
SEA - Wr David Moore has a hair line fracture in his humerous bone - and will miss start of season while healing - but won't be put on IR so could be back by week 3 or so.
CLE - Odell Beckham Jr was back in practice after getting through his hip injury issue

Administrator
Look for Houston to pick up a FA RB after final cuts and place your $$ on it being Hyde who has fallen to 4th on the KCC depth chart.

mudloggerone said:
Look for Houston to pick up a FA RB after final cuts and place your $$ on it being Hyde who has fallen to 4th on the KCC depth chart.
Click to expand...

any rumblings on possibly trading for a rb? Maybe Gordon of LAC or a Philly Back or some such?

Administrator
Nothing in the wind on my side of the bayou. Maybe over Khan's way?

mudloggerone said:
Nothing in the wind on my side of the bayou. Maybe over Khan's way?
Click to expand...

There was one rumor of them signing Jay ajayi but it turned out to be proven false. I'm sure they are going to make a signing of someone for depth but they right now believe that Duke Johnson can handle the role

Administrator
They'll be much better off letting him try to be the bell cow. I've always wondered what he could accomplish if given the chance.

mudloggerone said:
They'll be much better off letting him try to be the bell cow. I've always wondered what he could accomplish if given the chance.
Click to expand...

Administrator
I am thinking we are going to see extended hold outs....
LAC - Last reported NO changes in talks or movement on Melvin Gordon at all
DAL - report just came out again that Zeke is training with Marshall Faulk to keep in shape during his hold out, Faulk was asked if Zeke is willing to miss checks for holding out to be paid as top back, Faulk countered with is Dallas ready to have Zeke miss games by not paying him as the top Rb. He has not reason to go back folks. This season won't count for him to get to FA, so Dallas can hold off on having to tag or whatever for another year. He has to stay out til he gets a new deal.

mudloggerone said:
They'll be much better off letting him try to be the bell cow. I've always wondered what he could accomplish if given the chance.
Click to expand...

MongerKhan said:
The Limited statistics say that he is an above-average Runner in his career mostly because he's mostly known for being a pass-catching threat
Click to expand...

My fear is two fold. He has never been THE guy and had that many carries.
HOU OL is atrocious. Even if he could hold up, he will get beat to death. I am starting to drop my rankings on Watson due to that awful OL

Administrator
It'd be fine with me if he never came back.

Staff member
Moderator
Apparently there is mutual interest between Miami and Jadeveon Clowney. He recently met with their new head coach and staff members.

Update: While he met with Miami rumor says his preferred destination is Seattle or Philly
Last edited: Aug 28, 2019

MongerKhan said:
Apparently there is mutual interest between Miami and Jadeveon Clowney. He recently met with their new head coach and staff members.

Update: Whole he met with Miami rumor says his preferred destination is Seattle or Philly
Click to expand...

Cool thanks Kahn,
Per a follow up report, Clowney has told Houston he wants to go to a competitive team, wants to win a title. So doubt the Miami deal happens.

Administrator
More updates:
NYJ - Robby Anderson Wr is having calf issues and is missing practice
HOU - more Clowney news, per sources Clowney had intended all along to report and sign his tender this week. However, once he heard he was being shopped in a trade he changed his mind. Now he can't be traded until he signs so he could control where he goes.
CLE - team is still waiting to hear from the league to see if Hunt and Calloway(both suspended) can stay with team during suspensions or not
SF - Dee Ford has returned to practice after he got Platlet rich plasma treatment on his balky knee. He seems to be functioning well per reports
SEA - D.K. Metcalf has a chance to play in week 1 per HC
TAM - Jason Pierre-Paul has been cleared to begin rehab after breaking a vertebra in his neck during a car accident. Team has no idea if he will ever make it back on the field, but this is a huge step for him
SF - Jerrick McKinnon is back at practice today for the 9ers
OAK - Jon Gruden is really starting to like Nathan Peterman as back up Qb and is raving on him
SEA - more good news Ziggy Ansah is at practice for the first time
WAS - Rumors are out they are trying to deal Josh Doctson Wr prior to start of season
PHI - DeSean Jackson has a broken finger and is in question for start of season
GB - Oren Burk Lb was at practice for stretching after tearing his pectoral, per team he won't need surgery so won't go on IR and may just be weeks away
HOU - Wr Keke Coutee will probably miss week 1 of the season with a sprained ankle

Administrator
SF - Well that didn't last long, in his first practice back from knee issues, Jerrick McKinnon had a set back. Team is concerned
NYJ and IND have made a trade - Colts get 6th round pick from Jets for Cb Nate Hairston
DEN - stop if you have heard this one, Jake Butt Te is having more knee surgery - a "minor" procedure....
NON-NFL related - Alabama LB Dylan Moses is out for season with a torn ACL - He was considered a first round prospect in 2020

Status
Not open for further replies.